Chronotheater returns to the subway in Madrid 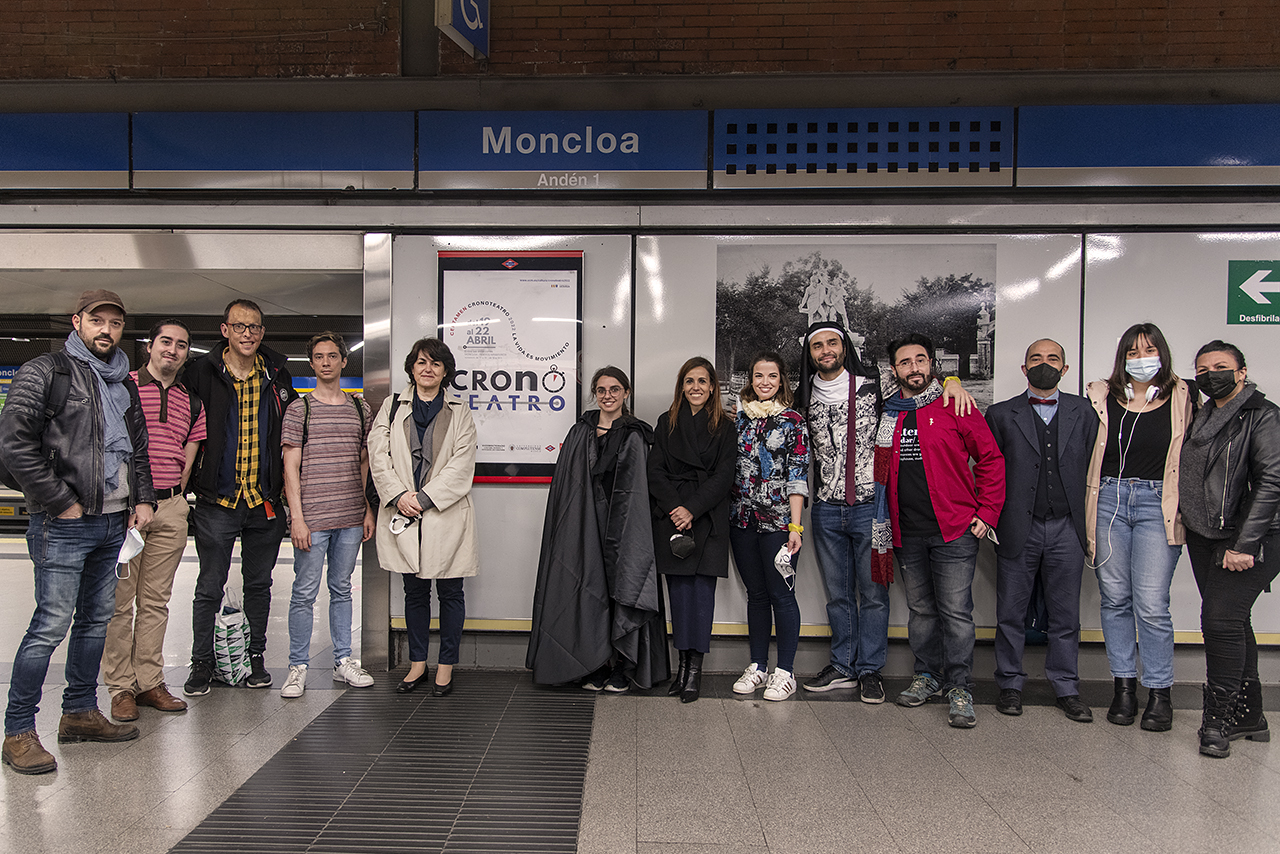 The Chronotheater comes back in Madrid temporary between April 20-22

After a pandemic year in which the Cronoteatro activity, organized as part of the Semana de las Letras UCM, had to be held online, the eighth edition of this show, which for its director and creator, César Barló, is “pure magic,” can be enjoyed until April 22. After seeing a couple of performances, Isabel García Fernández, vice-rector of Culture, Sports and University Extension of the Complutense University, and Silvia Roldán, managing director of Metro de Madrid, agree with this definition.

From 11 a.m. to 1 p.m. and from 4 p.m. to 6 p.m., during off-peak hours of the Metro, it is possible to meet a group of actors at some point on Line 6, between Moncloa and Nuevos Ministerios, who seek to make “the trip different”.  According to César Barló, since this initiative was born ten years ago, the aim has been to create something different, an experience that changes the usual journey of the spectators and brings the theater closer to the public also. In face”here the theater finds you”.

This poses a challenge for the participants in this activity (this year 42 people), because they never know what they are going to find or before whom they are going to represent the short play they have rehearsed. Above all, because it is not the same to prepare it in a quiet way than to perform it in a carriage or on a platform, where anything can happen. And it also happens quickly, which makes it necessary to adapt to the context immediately, and this is very appropriate for this year’s motto: ” chronotheater 2022. Life is movement”.

Isabel García Fernández and Silvia Roldán were able to enjoy the performance on the platform of Una sorpresa de muerte, by Dani Ultares, and Los quevedos de Sor Juana, by Rafael Negrete-Portillo, performed in the carriage, on the route from Ciudad Universitaria to Moncloa. Both the Vice Chancellor and the Councilor of Metro de Madrid have shown their enthusiasm for the plays and have ratified the unwavering support of the Madrid transport system to the Complutense for the realization of Chronotheater. Something that, as García Fernández recalls, has been the case since the beginning of this activity.

Those who do not come across the plays, but want to see them all, will be able to do so on Friday 22 at Chamartín station, from 7 p.m., and later they will be able to read them in the edition of the texts that will be made by the Instituto del Teatro de Madrid.

Informed Barló that this year a group from Barcelona has been selected to participate, which is the second representation from outside Madrid, after a group from Switzerland in the first edition. The Barcelona group is, specifically, a dance group, a discipline that has been included for the first time this year and is represented by three of the ten pieces in total, six in cars and four on platforms. Apart from those already mentioned, you can see the works Bruna, by the Joven Compañía La Colé; Frágil, by Jenaro Pérez-Villamil Fernández; ¿Nos tomamos algo? by Daniel Sanz Torres; Me gustan las estaciones en curva, by Ricardo Nafría Cascante; Media vuelta para dar la vuelta entera, by Joakin Ward and Julie Dubois; Despedidas de un no-encuentro, by the Uku Pacha Company; El renombramiento, by Daniel Sanz Torres, and La espera, by Felipe Rojas.