The Alumni Association of USAL and the Salamanca City Tourist Board are strengthening their cooperation. 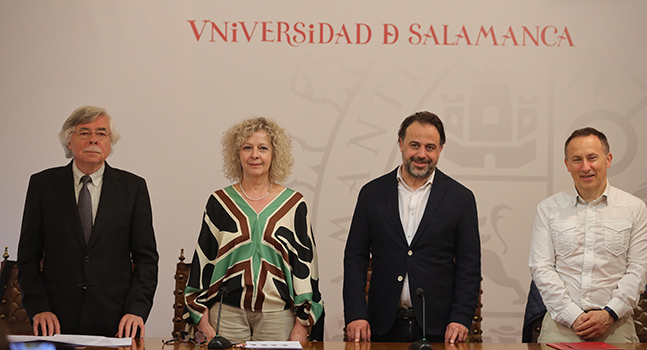 The chess festival “Salamanca Cuna del Ajedrez Moderno” will be held for the fifth time this year and the event will last for a whole year. In 2021, it reaches 17 countries.

Thousands of graduates will visit Salamanca mainly in May, June, October and November. 2021, despite the epidemic, more than 2,000 alumni visited Salamanca with the brand “Salamanca-Finde”.
Celia Aramburu, Vice Rector for Student Affairs and Fernando Castaño, Commissioner for Tourism and University Relations, Román Álvarez, President of the Alumni Chapter of the University of Salamanca and Amador González, Head of the Chess Festival “Salamanca Cuna del Ajedrez Moderno” April 26 at a press conference held in the Rector’s Office to present details of the joint actions planned for 2022 by the “Salamanca Tourism” association and the Alumni and Friends of the University of Salamanca.

In her speech, the Vice Rector for Students, Celia Aramburu, said, “From the beginning of the University, we have strongly supported our alumni because we believe that our alumni are the best ambassadors we can have for the city of Salamanca and USAL. That’s why the collaboration with the City Council is so important,” stressed.

In this sense, the Commissioner of Tourism and University Relations mentioned that “the former students of the University of Salamanca are pure gold. Without the University, Salamanca would not be a leader in tourism. The Alumni Association is not only the oldest alumni association, but it is also the earliest active of all public universities”.

Amador González noted that this year “the festival reaches its fifth edition, which also coincides with the 525th anniversary of the book Lucena. A double reason to have events throughout 2022”.

This initiative was created in 2021 and was reinforced by the signing of an agreement in 2022 aimed at attracting hundreds of alumni to the city each year.

In recent weeks, more than 100,000 alumni have been contacted so that they can visit Salamanca with their families. All this, through this brand, includes the celebration of anniversaries of different promotions in the form of tour packages that combine visits to heritage sites. The next dates for the closure of the anniversary are in May, specifically the weekends of 20, 21 and 22, as well as in June, October and November.

In addition, actions will be promoted to welcome visitors to the city, with a guided tour, with the intention of extending the stay to at least two nights in the case of national visitors and to more than three nights in the case of foreign visitors. In this sense, specific tour packages will also be developed for alumni arriving on dates other than anniversaries accompanied by their family or friends.

During 2021, despite the impact of the pandemic, more than 2,000 alumni were directly involved in the activities organized under the brand “Salamanca Fuente” during October and November 2021. On the other hand, hundreds of alumni visited the city with their families and personal promotions on top of the anniversary events, and in total more than 3,500 alumni enjoyed the cultural, social and gastronomic offer of this collaboration.

Although the main core events will take place from October 24 to 29, a new series of special events will be introduced in this edition commemorating the 525th anniversary of the publication of the Lucena Anthology – Salamanca 1497, in order to see the festival and the brand of Salamanca and its University as the cradle of modern chess throughout the year.

Some of these novelties include the organization of conferences, competitions for children and the general public, synchronized games and exhibitions or a film series throughout the year. Some of them will be held in other locations such as Avila, Zamora, Behar or Alvadtormes. The festival will also include the International Open Tournament – Pablo de Unamuno Championship – where many amateurs and professionals from Spain and abroad will come to our city to measure their strengths, and the Chess Education Congress.

Taking stock of the follow-up of the last tournament, in addition to the official website, it is possible to see the tournament live on the main specialized broadcasting channels: Chessbase – Playchess-, Chess24.com, Chess.com, Chessarena.com or Chessbomb.com, pages with a large audience.

Furthermore, this year the chess festival is again on the front page of the main professional website, ChessBase Germany, which has millions of readers, as it is the main international reference point for the latest chess news. Worthy of mention are the French magazine Europe-Echecs, which covered the event extensively in its February issue, and the International Chess Federation (FIDE), which has more than 190 member countries. In this regard, special mention should be made of the coverage by the main Russian-language chess website chess-news.ru, which is widely followed in Russian-speaking countries.

It is worth mentioning that the national media such as The Nation or the sports newspaper Macca created great interest in the presentation of this fourth edition of the festival.

It is estimated that in the fourth edition about 100,000 people per day followed the development of the festival through official websites, specialized websites and media covering the event in 17 countries.

The program is hosted by Sergio Martín Herrera, RTVE journalist and member of the USAL Alumni Association Board of Directors, and is broadcast online through the USAL Alumni Association’s YouTube channel. The space also has the collaboration of the Faculty of Social Sciences, where a dozen volunteer students with degrees in Communication and Audiovisual Creation play the main task of television production.

Their aim was to serve as an intergenerational meeting point to evoke interest in visiting the city while studying at USAL. Salamanca is reflected as a university city, contemporary and alive 24 hours a day. Its status as a World Heritage City and European Capital of Culture is also highlighted.

During 2022, some 20 programs will be broadcast, including an upcoming event with magician Luis Piedrahita on April 28, and a program from Patio de Escuelas on the occasion of the visit of the Autonomous University of Nuevo León on May 4, as well as in June from Madrid with leading experts on the war in Ukraine, such as Alumni-USAL advisor Araceli Mangas’ program. All programs can be followed on Alumni-USAL’s YouTube channel.

Throughout 2021, 20 programs were broadcast, with the participation of Michelin-starred chefs, professional athletes, researchers, actors and others. All of this means more than 400,000 influences and views on the various social networks of the alumni association, and even the broadcast of one of the programs on Channel 11 in Mexico and Latin America.

During 2022, the USAL Alumni Association will organize more than 60 social, cultural and sporting events. It is also worth highlighting the growing number of events in the chapters of Madrid, Argentina, Mexico, Panama, Chile and Brussels. Among the most prominent events are the following.

The Alumni Tournament – Vicente del Bosque, held in Salamanca on May 6, 7 and 8.

The Vicente del Bosque alumni competition in Salamanca in September.

Lecture series on Nebraska in September

Round table on St. Teresa of Jesus in October