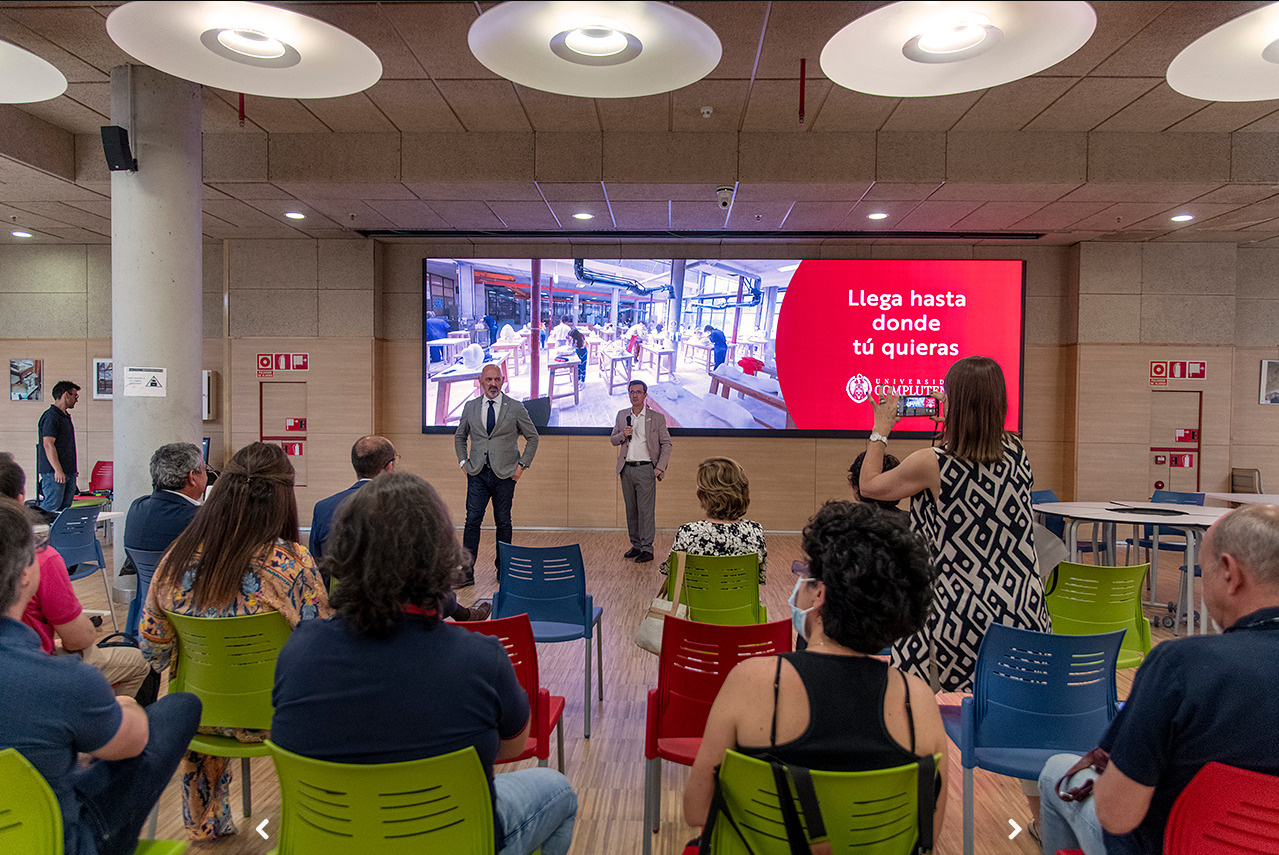 From 11 July, the Complutense community will have three new active learning rooms at its disposal.

These new rooms – located in the María Zambrano Library, the Student Building and the Antonio de Nebrija Hall of Residence , in the words of the Rector Joaquín Goyache, “a very important step” taken by the Complutense towards a “more flexible, dynamic, interactive, participatory and student-centred” teaching model. The intention, according to the rector – and to this end he announced the launch of an ambitious investment programme – is to equip all faculties with rooms similar to those presented, which use “technology with a purpose”.

The active learning rooms are, as vice-chancellor Jorge Gómez explained, the result of a year of work by his vice-chancellor’s office with the aim of advancing in the digital transformation of teaching, which inevitably involves the transformation of teaching spaces. According to both the rector and the vice-rector, previous experiences, such as the Hiperaula at the Faculty of Education and others set up at other centres, have been “inspirational” for these new rooms. The first three rooms, which constitute an initial pilot experience that will serve to polish defects and incorporate needs that are observed, have been installed in the old assembly hall of the Students’ Building, in what has been called the Kuwait room of the Antonio de Nebrija Hall of Residence and in the José Luis Sampedro room of the Maria Zambrano Library.

As the vice-rector explains, each room serves a different purpose. The Sampedro room is intended to be the nerve centre for large events with its 7-metre wide LED screen. The Kuwait room, at the other technological extreme, with a modest 2m square LED screen and two digital whiteboards. In the middle ground is the former assembly hall in the Students’ Building, with two video walls and two digital whiteboards.  All three rooms are equipped with video conferencing facilities, motorised cameras and room microphones (picking up ambient sound) for basic conference use. Professional microphones can also be connected for higher quality.

Active learning rooms are rooms designed to be flexible and multi-channel. These spaces are open-plan, without fixed chairs so that they can be used in different ways, depending on the activity.  They are spaces where audiovisual elements can be accessed in at least three different ways. They are designed to accommodate different types of activities and to allow the testing of pedagogical models beyond the stage. And, above all, to be easily operated.

The wireless access to the room is remarkable. Using a USB connector that resembles a medallion, a laptop can be connected wirelessly to a camera in the room, to the room microphone and to all the screens available at that moment.

On the interactive side, we worked with ultra-short-throw projector whiteboards. These are boards that allow drawing on them with special or electronic markers. They also allow magnets, stickers or other elements to be attached to them. They are made to withstand prolonged physical contact without losing image quality. Interactivity goes as far as allowing individual projection from tablets or mobile phones, using miracast technology without the need for additional software on the mobile.

The rooms, according to the vice-chancellor, also represent a digital transformation in terms of maintenance and operation. Room configuration problems can be checked remotely thanks to remote connections and Lightware technology. All rooms are operated either from a button panel or from a graphical interface on the classroom PC. Each room is equipped with a touch screen for easy operation.

The presentation of the three active learning rooms also included a small demonstration of their possibilities, connecting them together to carry out a training session on the “Climate Generation” project, in which UCM – https://ucm.es/generacionclima- is participating in preparation for COP27, to be held in Egypt in November this year. The Vice-Rector for Students, Rosa de la Fuente, presented what this initiative consists of in the new room located in the Students’ Building, and a group of students developed various dynamics in the Kuwait room of the Antonio de Nebrija Hall of Residence.

Faculty, students or members of the Administration and Services Staff interested in using any of the new rooms to hold a specific event from 11 July can already make a reservation request through the website https://www.ucm.es/vrts/aulas-de-aprendizaje-activo.