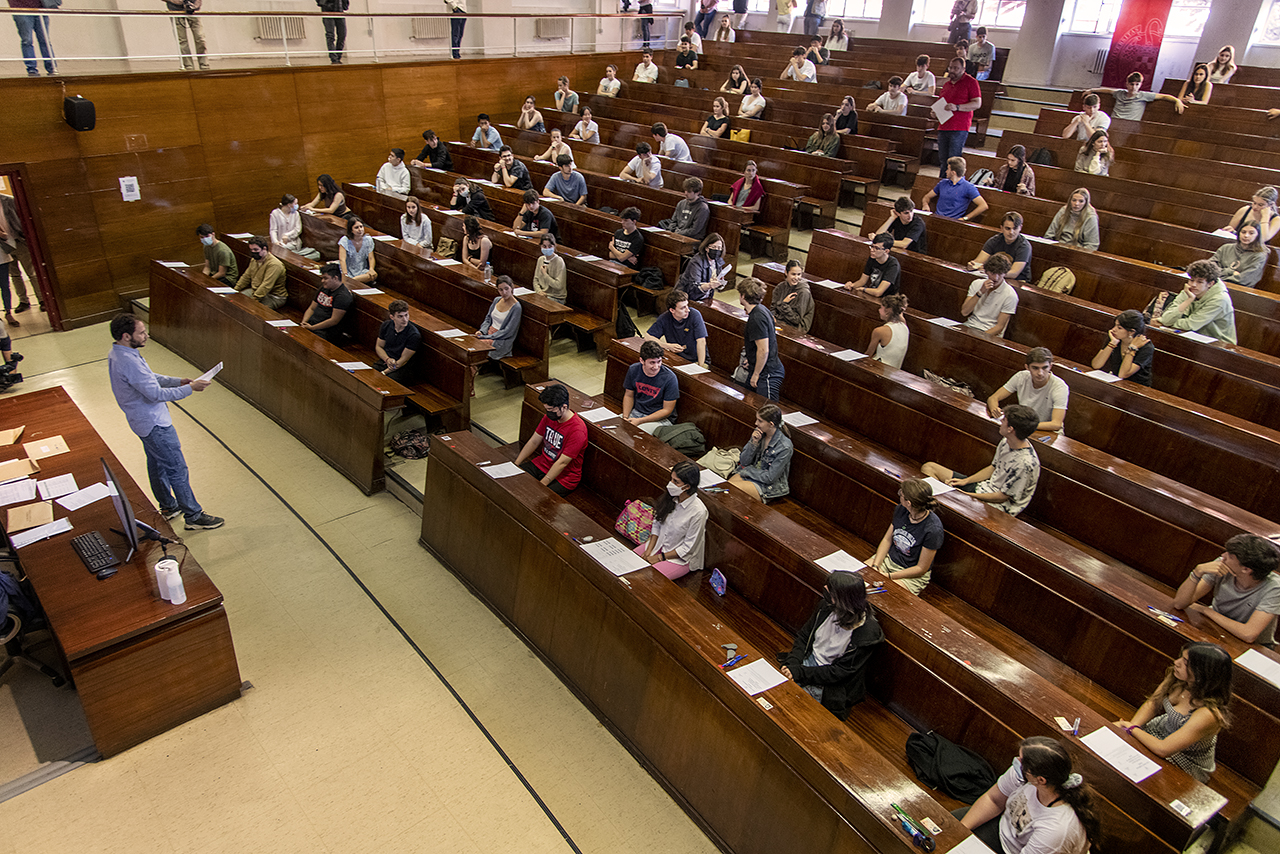 This week, 12,704 students are taking the University Entrance Examination (EvAU) at the Complutense University.

38,220 students taking the exams this year in the Community of Madrid, most of them coming from the Bachillerato, although there are also students from the Ciclo formativo de Grado Superior de Formación Profesional (614 taking the exams at UCM) and those who are trying to improve the grade they obtained in previous exams (490). For them, 178 classrooms have been set up in 15 Faculties of the Moncloa and Somosaguas campuses, which are attended by more than 400 correctors and members of the faculty.

As Rosa de la Fuente, vice rector for Students at UCM and president of the Organizing Committee for the EvAU Test in the Community of Madrid, points out, the EvAU 2022 is a “return to normality but with precautions. The use of face masks is recommended, the capacity of the classrooms does not exceed 50 percent in any case, ventilation is constant and at the end of each test students must go out in the open air.

The EvAU will also last 5 days this year in order to avoid overcrowding in the centers. The first two days are for the core subjects -on Monday for those coming from the Science track in the Baccalaureate (6,300 of those taking the exams at UCM), and on Tuesday for those coming from the Humanities and Social Sciences (5,300 this year)-, Wednesday and Thursday for the specific subjects, and Friday is reserved for those who have had overlapping schedules in the specific subjects or those who have had some incident that would make it advisable to repeat the test or move it to that day. This year, as emphasized by the vice-rector of the Complutense University, more than 1,000 requests for adaptation from students with special educational needs (TDH, TAD, autism, dyslexia…) or physical diversity will be attended.

Also the tests themselves continue with the “Covid of optionality” model, launched in the 2020 call, with the intention then to provide greater facilities in the face of the difficulties caused by the pandemic to meet the totality of the syllabus. According to Rosa de la Fuente, and given that the effects of the pandemic in the classrooms have still been felt this year, it has been decided to maintain a model which, in fact, has led to an increase in the students’ grades compared to the years prior to the pandemic. According to the Vice Chancellor, this measure is also based on the fact that many university professors are noticing that students in recent years are arriving at the university, in general terms, with worse preparation, possibly also as a result of the pandemic.

This year, the trend of an increase in the number of students coming from the Science track in the Bachelor’s Degree has continued. According to the Dean of the Faculty of Law, Ricardo Alonso, who accompanied Rosa de la Fuente, together with the Vice-Rector for Studies, Víctor Briones, at the press conference they gave to the media, this trend is due to the perception that students have when they have to make the decision of which path they are going to follow in the Baccalaureate, that following the Science pathway closes fewer doors to them than the Humanities and Social Sciences. This, in Alonso’s opinion, is confirmed when a significant number of these students later choose to study Social Sciences at university. According to Rosa de la Fuente, the consolidation of the new “General Baccalaureate” pathway is likely to break this trend, since it is designed to respond to the increase in the number of students who wish to study “mixed careers”.

The results will be announced on June 15 at noon. From then until July 1, the pre-enrollment process will be open. Those who wish to claim their grades will be able to do so on June 17, 20 and 21 (the latter until 2 p.m.).  The Complutense University offers more than 12,000 new places for the 2022/23 academic year.