UCM hosts the annual meeting of the People’s Health Movement. 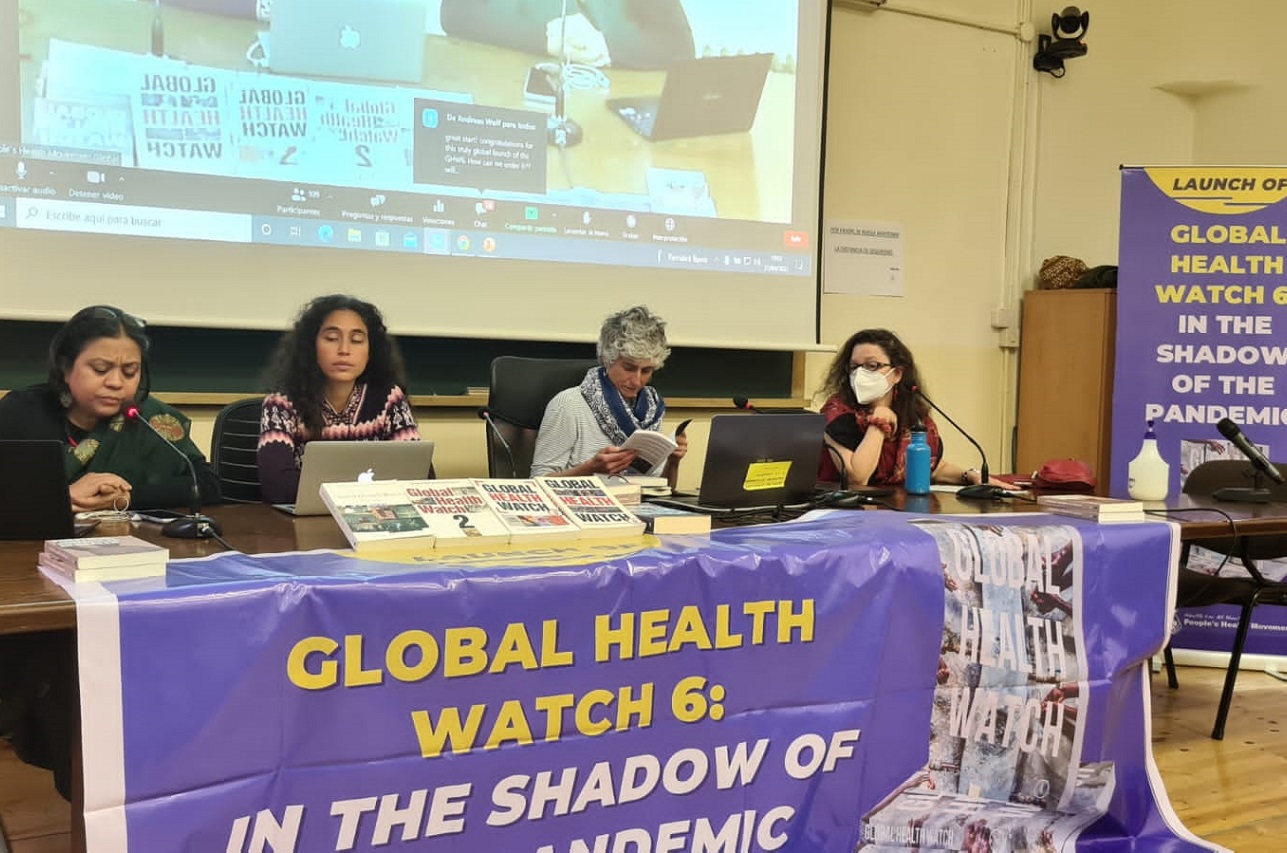 UCM hosts the annual meeting of the People’s Health Movement.

The Faculty of Political Science and Sociology of the Complutense University of Madrid hosted the annual meeting of the board of directors of the People’s Health Movement (PHM), “a global network that brings together activists for the right to health, civil society organizations and academic institutions around the world, especially in low- and middle-income countries. Professor Manuel Espinel, from the Department of Applied Sociology, facilitated this meeting, which was used as an opportunity for the international presentation of the sixth Global Health Watch report, subtitled “In the shadow of the pandemic”.

Manuel Espinel adds that the People’s Health Movement is global, international and its function is to fight for the improvement of the health conditions of the population, especially in the countries of what is called the Global South. At annual meetings they discuss their policies, the agendas they are going to develop to improve access to health systems and, especially now, in times of pandemic.

This Movement is part of the World Health Organization and is a critical watchdog of WHO policies, seeking to ensure that these policies contribute to improving the conditions of the population with the least resources. Espinel reports that the meeting was attended by people from many different countries around the world, some thirty representatives from places such as Libya, India, Argentina, Colombia, Nicaragua, Belgium, Malaysia, Italy… representing the 70 nationalities that have already joined the Movement.

Espinel, who is a member of international study groups on these issues, stresses that the organization of an event of this type “is good for the Complutense, because it maintains an agenda of international activities and important weight, which is very important, because not everyone has the opportunity to have these exchanges and that in the classrooms these types of issues are discussed with people directly involved”.

The impact of the pandemic

According to the Complutense professor, COVID-19 has been very problematic in two aspects. The first was the measures and restrictions that were taken in many countries, where the majority of the population is in a situation of precarious employment, up to 50% of the population. In this situation, the restrictions have a very negative impact because these people live in the informal economy and have to go out on the streets to look for a livelihood to survive.

The second major impact is due to the limitations of vaccination, because in the absence of a clear vaccination program with the same conditions at the global level, “in many places access has been less than 10% of what it has been in the European countries of the Global North, where 90% of the population has had access to up to three vaccines”. This big difference has become a very harmful burden, especially because there was already a basic problem of health systems and access to them.

Espinel recalls that after the last great economic crisis it was thought that capitalism was going to be reformed, but “we remained the same or worse, and the same thing happened with the pandemic crisis, which was presented as a crisis of civilization from which it was thought that we were going to come out better, but this has not been the case either, in the end it can be seen that things have not changed substantially, unless they are even worse, as in the healthcare system in the Community of Madrid, for example”.

The only thing that has improved, according to Espinel, is “the intensification of digitalization and the virtualization of experiences, which is something that has accelerated in an impressive way, both with commerce and teleworking and the ways in which management has been digitalized”. However, this great change has not reached countries where the digital divide is very large and where job insecurity is very high.

In addition to COVID-19, there is now the war in Ukraine, “which does not look good at all”, because the first thing that has happened has been a global rearmament, an increase in military spending and even a permanent tension with the possibility of using weapons of mass destruction or nuclear weapons. Along with that, it has created a major fuel crisis and what it has meant for everyday life, whereby “the announcements that every crisis portends a change in positive attitudes, does not seem to actually develop, but rather the data points to the opposite, to a worsening of living conditions.”

As part of the activities of the People’s Health Movement, the School of Labor Relations hosted, on April 27, the presentation of Global Health Watch 6, which evaluates the global health situation. Roman Vega, global coordinator of PHM, informed that “this is the beginning of the public launching of the Global Health Watch report, which arises from a process of collective, scientific, intellectual and political construction”. He also asserts that this is “a historic work on the reality of global health, the living conditions of peoples, workers, indigenous communities, women and groups with different sexual identities around the world”.

According to Vega, the activists of this movement have been able to “investigate the reality, confronting the world hegemonic power to outline solutions to those difficulties that overwhelm us on a global scale”. This report, therefore, reflects the living spirit of the struggle and the demands, it shows the “desire to fight, to mobilize in the face of the challenges and it is a call to start a path of public discussion”.

Complutense professor Manuel Espinel recalled in the presentation that he met Vega in the struggles in Colombia in the mid-1980s, and that friendship was, in part, what made it possible for both the meeting and this presentation of the report to be held at UCM.

In an online presentation, Ronald Labonte, from the School of Epidemiology and Public Health of the University of Ottawa and co-editor of the report, explained that 110 authors from 28 countries have prepared the work, a text that occupies 468 pages, divided into 20 chapters. The editorial group included people from Kenya, Greece, India, South America/Senegal, Colombia and the United Kingdom.

Labonte pointed out that the report speaks of the “need for degrowth, which should not be confused with non-growth; it is an ethical way for the whole population to consume, without fast fashion, without damaging the environment. There are many alternatives that are already being applied in some small economies, respecting all living beings”.

During the presentation, a short video was shown with statements by some of the participants in the report, both those who attended and those who did not. Among the latter, Rene Loewenson, from TARSC/Equinet, pointed out that with COVID-19 and with ecological degradation increasing inequalities, promoted by neoliberal globalization, poor people and indigenous communities will be the most affected. Loewenson believes that this report is a resource to “read, discuss and share because of its strategies for a more just and healthy world. It will also help create a more just, healthy and sustainable future”.

PHM co-president Sulakshana Nandi participated in the video, but was also present at the School of Labor Relations, and spoke of the need to ensure access to equitable and quality health services for all people, because that has always been the Movement’s goal. The speaker explained that the rampant privatization of the health sector, which reaches levels close to 75% in countries such as India, “offers new ways for investors to accumulate wealth and frees rich countries from the responsibility for their exploitative policies and economies”. Susana Barria, from PHM, also spoke about the processes of privatization of healthcare, especially in this era of COVID-19.

Amulya Nidhi, from PHM India, emphasized that human health is part of the health of nature and that is why the Movement is dedicated to developing a global campaign against the impact of extractive industries. It also supports and promotes struggles for indigenous, land and forest rights and has invited all activists to join the PHM platform.

Anne-Emanuelle Birn, professor of Global Development Studies at the University of Toronto (Canada), emphasized the damage caused by this extractivist policy, with the example of Canadian mining, through transnational companies located in that country, and the harm it causes, at a global level, to both health and society.

For her part, Erika Artiaga, from PHM’s Health and Ecosystem thematic circle, pointed out that “a development model based on extraction, growth and consumption will continue to worsen the situation”. In contrast to this, the report presents eight examples of popular resistance in different territories around the world, in such a way that “an alternative vision is proposed on how communities should and can relate to each other and to the planet”.

For Espinel, it is essential that people have a much greater role in the relations between the Global North and the Global South, and that extractivist activities are reduced, “understood in a broad sense, not only of natural resources, but also of knowledge, and that more egalitarian, more equitable and more cross-cutting relations can be managed”.