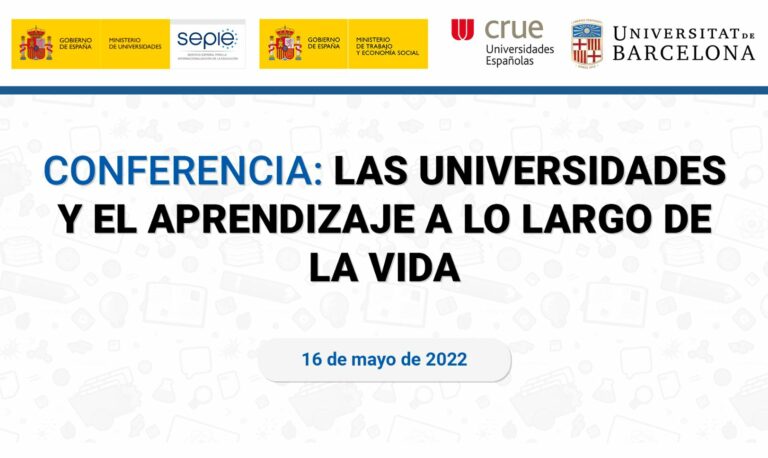 Madrid, May 4, 2022. Crue Universidades Españolas has organized jointly with the Ministry of Universities, the Ministry of Labor and Social Economy, the Spanish Service for the Internationalization of Education (SEPIE), in collaboration with the University of Barcelona, the “Conference: Universities and Lifelong Learning”. This session, which can be followed in person or remotely, will be held at the Aula Magna of the University of Barcelona on May 16, from 10:00 to 12:30, within the framework of UNESCO’s World Higher Education Week 2022.

The meeting aims to promote the role of universities as institutions of lifelong learning and will include the participation of relevant national and international speakers, who will present innovative policies and practices in relation to this issue. The opening ceremony will be attended by the president of Crue and rector of the Carlos III University of Madrid, Juan Romo, together with the Minister of Universities, Joan Subirats; the Secretary of State for Employment and Social Economy, Joaquín Pérez, and the rector of the University of Barcelona, Joan Guàrdia. The registration period will remain open until May 11.

After the opening ceremony, Raúl Valdés, from the UNESCO Institute for Leifelong Learning, will give a lecture entitled “Universities as institutions of lifelong learning: a new frontier for higher education? “This will be followed by a round table on “Inspiring Policies and Practices” with representatives from the European Commission, including Vanessa Debiais-Sainton, Head of Unit for Higher Education Policies and Programs, Directorate General for Education, Youth, Sport and Culture; Simon Roy, OECD Higher Education Policy Team; Michael Gabael, Director of the US Higher Education Policy Unit; and Michael Fung, Director of the Institute for the Future of Education at the Tecnológico de Monterrey (Mexico). This roundtable will be moderated by Nancy Anne Konvalinka, member of the Executive Committee of Crue-Docencia and vice-rector of Academic Coordination and Quality of the UNED.