The University of Salamanca confers an honorary doctorate on Professor María Ángeles Durán. 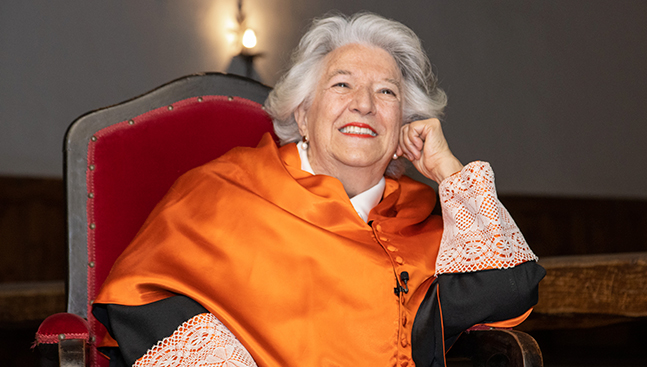 Rector Ricardo Rivero presided over the ceremony, in which Professor Soledad Murilllo acted as godmother, and which was attended by many personalities from the world of teaching and research.

The USAL recognizes her research work in fields such as women’s work and dependence.

The University of Salamanca has conferred an honorary doctorate on the Spanish professor and researcher María Ángeles Durán, during a solemn ceremony held this morning in the Paraninfo under the presidency of the rector, Ricardo Rivero.

In the central part of the ceremony, María Ángeles Durán received the attributes that recognize her as the new doctor “honoris causa” of the University of Salamanca: the insignia, the biretta, the ring and the book.

With a degree in Political Science and Economics from the Complutense University of Madrid, she completed her doctoral studies with stays at the University of Michigan and the Institute for Social Research. She was the first woman professor of Sociology in Spain, and also the first to obtain the National Prize for Political Science and Sociology. Along the same lines, she promoted the creation of the first Institute of Women’s Studies in the Spanish university system at the Autonomous University of Madrid. An important part of her research career is linked to the Consejo Superior de Investigaciones Científicas (CSIC), to which she continues to be linked as a member of the Research Group on Aging. She has more than 200 publications and has worked as an advisor to international organizations such as the United Nations, the International Labor Organization and UNESCO, among others.

Her nomination as doctor “honoris causa” by the University of Salamanca was presented by the Department of Sociology and Communication, and approved last December 22nd.

In her speech the new doctor for Salamanca recalled her family and professional ties with this university, and in particular with the Faculty of Social Sciences, which celebrates its 30th anniversary in 2022. “For more than fifty years my main object of study has been work. All work, not just employment. Research on work entails research on inequality, redistribution within the family, channels of access to social protection institutions, use of time, concepts of poverty and wealth, integration and exclusion. Without forgetting the sick and dependent, who need the permanent work of caring for others without being able to pay for it”, recalled Professor Durán in her speech.

She also made several references to Fray Luis de León, whom, together with Galileo, she cited as an example of committed teachers who “support innovation in their own way, even if they pay a price for it, and try to research and teach despite frictions of all kinds, the risk of making mistakes and the discomfort that the introduction of new ideas brings them. They do not shout or tear down statues, but they end up transforming the way we know and live.

For her part, the godmother of the new doctor, also a professor of Sociology at the University of Salamanca, Soledad Murillo, emphasized in her speech the importance of María Ángeles Durán’s work in “quantifying the time required for domestic tasks, highlighting the unequal distribution of this workload between women and men, its consequences in terms of job offers and professional promotion”, adding references to other works on aging and dependence, and recalling the close relationship she has maintained with the Faculty of Social Sciences of the USAL since its foundation.

The rector, Ricardo Rivero, closed the ceremony by connecting the academic and research career of the new doctor with the history of the University of Salamanca, through Fray Luis himself “and his effort to overcome the prejudices of his time”, but also through the ‘Festina lente’ that can be read in one of the enigmas of the Edificio de las Escuelas Mayores. “We must not stop or rush, those who have gone before us tell us, and you are a good example of this”. With numerous references to time, Ricardo Rivero also recalled how it is a century since the appointment of the first woman doctor “honoris causa” by the University of Salamanca, Saint Teresa of Jesus, in 1922.

“Fifty years after obtaining your doctorate, you continue to demonstrate your ability to make us think, to enchant us and encourage us to transform reality with ideas, thanks to your lucid point of view,” continued the rector, adding that thanks to the results of María Ángeles Durán’s work, “Spanish society has begun to correct the outstanding debt owed to the brilliant, pioneering women of her generation. Also with every grandmother and mother who dedicated herself to the family, almost always more than the man, and who had a successful professional career, accrediting an outstanding talent”, he added.