“Badly wounded”, the thousand traces left by the passage of time on books 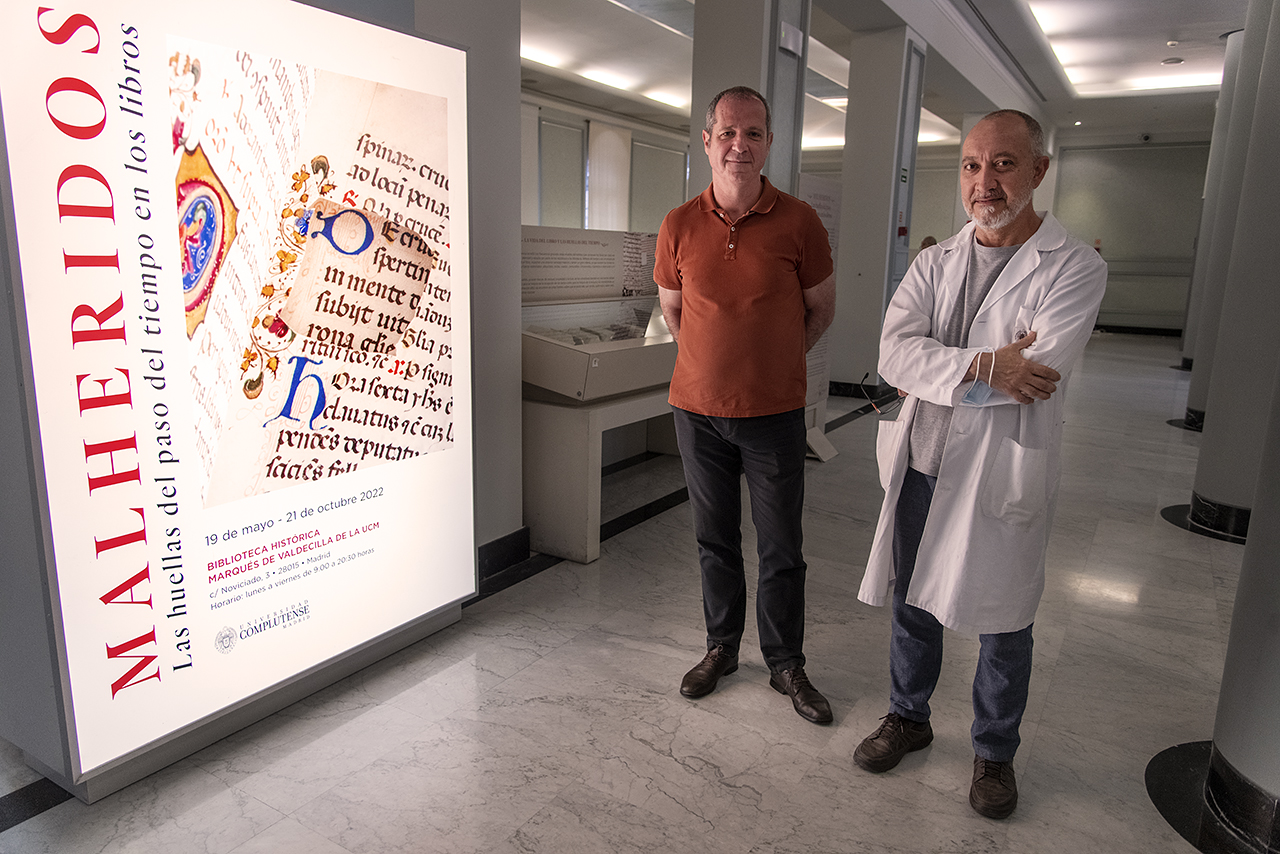 Censorship, wars, nature and use are the four main themes of the exhibition “Malheridos.

The traces of time in books”, which can be visited at the UCM Historical Library until October 21. Curated by the Library’s own director, Juan Manuel Lizarraga Echaide, and by the expert in book restoration and PAS of the Library, Javier Tacón Clavaín, it offers the possibility of guided tours on Tuesdays and Wednesdays. The exhibition is a joint activity of the heritage working group of the University Library Network (REBIUN), in which several libraries will hold simultaneous exhibitions, with their collections, on the damage to books throughout history.

The exhibition begins by addressing censorship with the exhibition of a few indexes, which were the volumes that listed the books that were banned and those that had to be expunged and set aside. It then moves on to the practice of censorship, with many books expunged with different methods, “depending on the seriousness of the texts.” According to Lizarraga, the most common practice was to tear out the pages or cut out the text box, and sometimes the pages were even glued together or printed matter was pasted on top of the parts to be expurgated. Another way of censorship was simply to use ink on top, staining the whole page or those lines that were not wanted to be read. Javier Tacón explains that in many of these cases it would probably be possible to see what is written underneath, with techniques such as thermography, but they are expensive and inaccessible.

In the exhibition it can be seen that the censorship technique depended on the personality of the censor, since “some were very delicate, while others are quite rude, without any respect”. Images were also censored, although it did not appear prefixed in the indexes, which only spoke of censoring images that made mockery of religion, but did not speak of nudity. Despite this, “there are many copies in the sample where it was covered, especially the part of the genitals”.

The second part, that of the effects of the war, gathers many copies, especially those that were used during the civil war as a parapet in the University City, which was where the bibliographic treasure of the Complutense was located and also where the front line of the conflict was, entrenched during the three years of its duration.

In the showcases you can see copies that were restored at the end of the 70s of the last century, among them the one known as Bible 31. Tacón explains that “at that time what was done was to restore the book to its original form, with a very significant investment in labor and materials”. Later, at the end of the 1990s, the UCM rescued books that had not been restored, placing the damaged pages in special plastic envelopes. These are “two different criteria, because in the first one, everything that is charred is removed, while now it is left and a large part remains visible”.

Among the works on display are some of the books that retain signs of the fighting in the University City, such as embedded bullets and even letters written in book covers. The director of the Historical Library clarifies that “these are books that are not restored because, as they stand, they bear witness to a very important historical event”.

From the post-war period there are also seizures of Republican organizations, among them those of the Library of the Residencia de Estudiantes, which in this case were withdrawn. Most of them deal with Soviet themes and were “condemned to hell, so that they could not be read by readers”.

The force of nature and chemistry

Tacón explains that all books are made of organic matter and are therefore subject to the laws of nature. In those exhibited in the exhibition one can see, for example, the effect of water on books, that “if they are dried in time, fungi and bacteria that feed on the stiffness and cellulose fibers do not proliferate in them, producing an extreme weakening of the paper”; the effects of fire can be lethal, or burn only on the outside, but in reality “what fire does is transform organic matter into carbon, which is what any organic material will be transformed into, although in the very long term”; the activity of living organisms is also shown, beyond bacteria, such as rodents and insects, which leave traces that indicate what type of animals they are, such as cockroaches, silverfish, woodworm of different species, termites….

There are also deteriorations of natural origin that depend on the materials from which the book is made. Modern wood pulp paper immediately turns yellowish, but there are also defects in old books, although “normally the older the paper, the better it is, and generally an incunabulum is in excellent condition”. Tacón reports that after the relative industrialization of the 18th century, a device called the Dutch pile was invented to increase paper production; it was a kind of very large metal mixer that left iron particles between the paper fibers and also the sizing of the paper was made with gelatin that was hardened with alum, which could also be contaminated with iron, and that makes the paper oxidize much more and today it is very dark.

The inks themselves can also cause deterioration. According to the curators of the exhibition, manuscript inks were made with natural products to which iron sulfate was added, and if too much of this caparose was added, the paper oxidizes and creates acidity, even disintegrating the paper.

At the same time, the skins that were manufactured after the industrial revolution are much less stable and become brittle very quickly. This is because “the traditional tanning system is changed, using more aggressive products, to speed up times. In addition, there are corrosive inks that were used to mar the leather and give it a more aesthetic appearance, which over time eat away at the leather itself.”

Faced with all these defects, interventions have been made over time, some incorporating new papers, completing fragments by imitating what was missing or completing the texts. Paper patches have been used to repair tears or animal guts have been used to glue like archaic zeal, or with the first real zeal, which was very quick to use, but was of very poor quality, and the adhesive darkens and penetrates the support. In the Biblioteca Histórica’s own workshop, many restorations have been carried out, for example, with “an automatic paper pulp reintegrator, which makes paper where it is missing, but it is a very interventionist treatment, because all the sheets of the book have to be disassembled to put them into the machine that makes the paper”.

The binding, which is increasingly valued as an element of the book, can also cause wounds, for example, by replacing original bindings with different ones; tearing the skin off the book to put it to another use; repairing with stitching, duct tape or even re-binding with flannel cloth.

There are books, as Lizarraga recalls, that simply expire for having obsolete contents, so it is decided to discard or destroy them, and at a time when book supports were very valuable, especially parchment, their remains were reused in other books. The best known are the palimpsests, which are books that were erased and written over, but the most common is to find remains used as covers, guards or reinforcements of the spines of the books. Now there are scholars, involved in international projects, who are in charge of studying these fragments of reused books, because sometimes they include very valuable and unknown texts.

The last section of the exhibition is the trace caused by the reader himself, and here we show mutilations of books and talk about thefts, which “occur continuously in libraries”. There are other signs such as the mark of ownership left by the readers, even marks on the edges of the books, but also underlining, hands, brackets and annotations in the margins.

There are even those who establish a deeper dialogue with the book, making comments, refuting it, which “acquires a certain value depending on who makes those comments, such as those shown, attributed to Michael Servetus or Gaspar de Jovellanos”. Other interventions by readers involve pasting different engravings or making funny little drawings in the margins of the books.

All these material evidences that can be seen in the books are the subject of a growing interest by specialists, since they provide a lot of information on how they were made, how they were read, how they were censored and preserved over time.