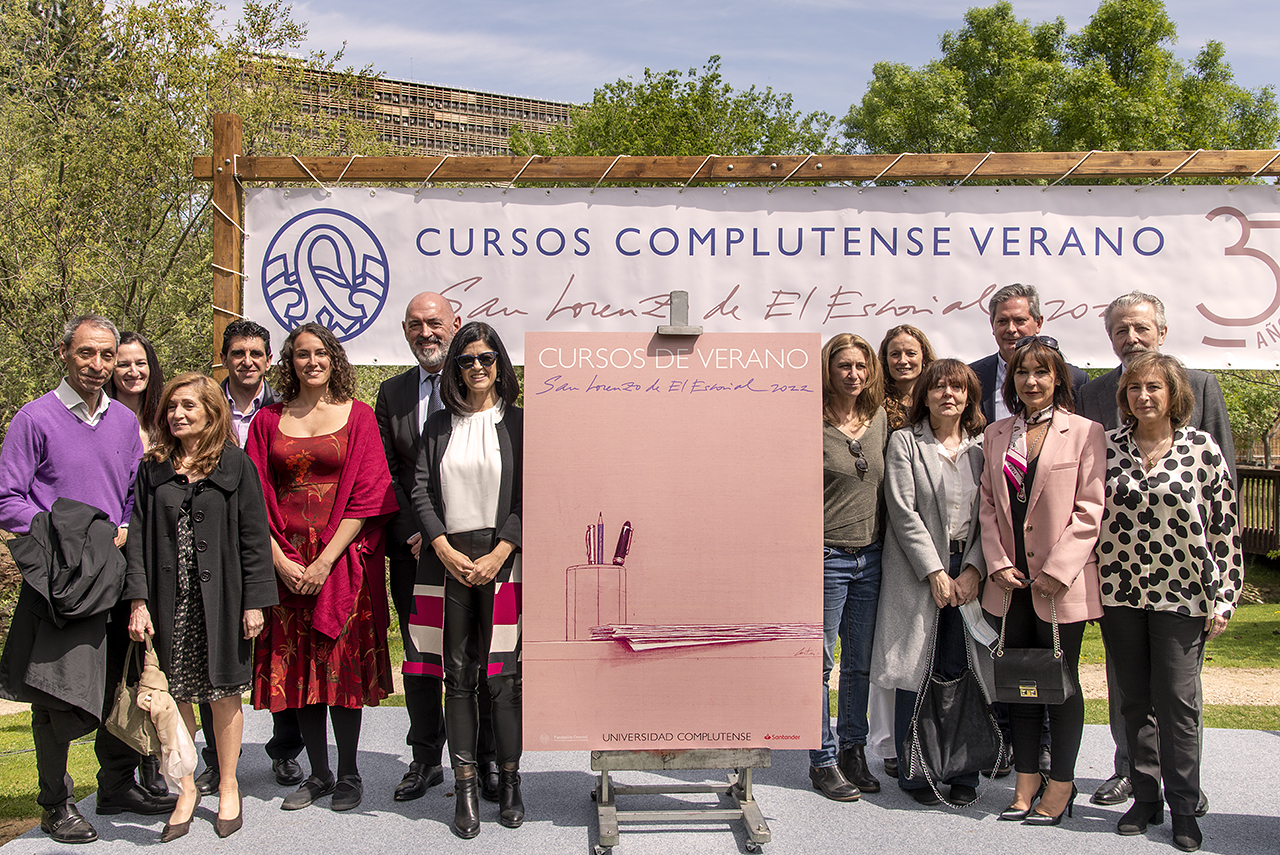 The thirty-fifth edition of the Summer Courses of the Complutense University already has a program.

The thirty-fifth edition of the Summer Courses of the Complutense University already has a program. It will be held between July 4 and 29 in San Lorenzo de El Escorial, with the exceptions of a course at the Prado Museum and another one in Robledo de Chavela. In total, as detailed by its director, Miguel Angel Casermeiro, at the presentation ceremony held on April 21 at the UCM Botanical Garden, sixty-two courses and twenty cultural activities and extraordinary conferences will be held. Both the rector of the Complutense University, Joaquín Goyache, and the president of Santander Universities, Matías Rodríguez Inciarte, expressed their conviction that this next edition of the UCM Summer Courses will be, like its precedents, a “resounding success“.

The first success is already its poster. Its author, the Cadiz-born painter Hernán Cortés, explains that the quartos and pencils it shows are nothing more than the essential elements for the expression of knowledge. The Summer Courses -defended Cortés, who last summer directed a portrait workshop- are in charge of transmitting knowledge in an exemplary way and of ensuring that the students and teachers who participate in them individualize it and always carry it with them.

For Matías Rodríguez Inciarte, the Complutense Summer Courses are “the truly emblematic of our country” and the 35 editions that will be held this summer are a guarantee of “tradition, maturity, prestige and recognition”. The president of Santander Universities also had words of recognition for the university as an institution, not only for its efforts in the difficult times recently experienced – “in one weekend it had to go from on-site to online”-, but above all for being “the great lever for the transformation of society”.

For Rector Joaquín Goyache, the Summer Courses are one of the most “noble” of all the activities organized by the University. For him there is no doubt that they are the best of all those held in Spain. Goyache thanked Professor Casermeiro’s academic team and the staff of the General Foundation for the effort and work they have put into their preparation and pledged to support them with his presence during their celebration.

Miguel Ángel Casermeiro, director of the courses, gave details of this year’s program, announcing that the opening and closing lectures will be given this year by two distinguished women from Complutense: María Emilia Casas, professor of Labor Law and Social Security and former president of the Constitutional Court, and the writer and professor of Contemporary Art, Estrella de Diego. Between the lectures of both of them, an extensive program of 62 courses will be developed, which will address topics from all areas of knowledge, and which have been chosen among the more than one hundred proposals received at the call that was opened just after the end of last year’s edition.

In addition to the major current political issues, analyzed by leading figures from the main parties of the parliamentary arc and social agents, issues such as geopolitical trends, European funds, fake news, public spending, jobs of the future will also be the subject of study and debate in the field of social sciences, peace processes and reparations for victims, training in the National Police, the gender perspective, federalism, the judiciary, diversity and inclusion in research, taxation in Madrid, cooperation in Latin America, jihadist terrorism, sport in today’s society and the future of Europe in foreign policy.

Experimental sciences, meanwhile, will address topics such as the eruption of the volcano of La Palma or the study of Mars and the Moon, as well as delve into the analysis of aspects such as geothermal energy, additive manufacturing, hydrogen technologies, science communication, multidisciplinary nanoscience or the future of science and scientists in our country.

Likewise, the programming of the health courses has been elaborated through subjects of interest to society, such as oncological pain, personalized precision medicine and pharmacogenomics, DNA nanoparticles and vaccines, hospital pharmacy, the challenges of the national health system, medical education, liver disease, vaccination, cardiac and pulmonary zoonoses, pandemics, infant and juvenile mental health, scientific literature, wine in the food chain or the study of yeasts.

In the case of the humanities, the program echoes some anniversaries such as the 90th anniversary of the university theater group La Barraca, directed by Federico García Lorca and Eduardo Ugarte in its beginnings, or the 15th anniversary of the death of writer Francisco Umbral, as well as exploring areas such as interaction in ELE, literature and journalism, the development of artistic careers, art and the life of works, the Romanian diaspora in Spain, nomadism and ecofeminism, the media and the prevention of violence against women, the life of people in history, the international dimension of cultural heritage, the School of Madrid or the theoretical and practical theater workshop led by director and actress María del Valle Hidalgo.