The Complutense University of Madrid commemorates the 200th anniversary of the first founding text that gave life to the Central University. 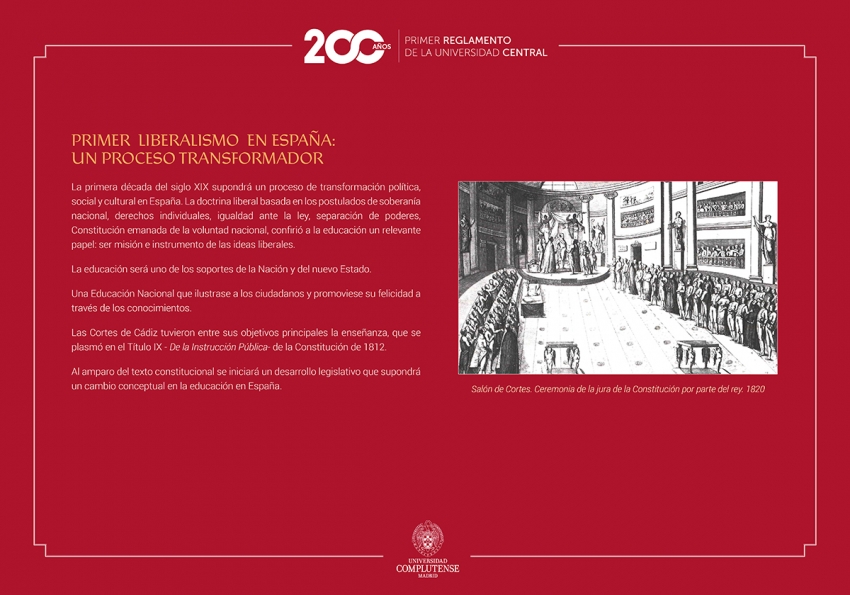 The Complutense University of Madrid commemorates the 200th anniversary of the first founding text that gave life to the Central University.

The Complutense University of Madrid will celebrate throughout 2022 the bicentenary of the First Regulation of the Central University, a historic event because it laid the general foundations of public university education in Madrid. In addition, it was attempted, for the first time, to transfer the University located in Alcalá de Henares and to provide Madrid with higher studies of third education in 1822. The return to absolutism truncated the project, and it was not until several years later that the central university was opened in Madrid.

The virtual exhibition -and another traveling exhibition in different centers and buildings of the UCM- is the starting point of this commemoration that will show visitors the regulatory framework that gave rise to an education described in the Constitution of 1812 under the ideals of the Enlightenment.

Through a selection of documents preserved in the UCM General Archive accompanied by explanatory texts, a chronological tour of the most important milestones that marked the path towards the establishment of the Central University is made:

– The Cisnerian University, as a symbol of the Ancien Régime.

– Early liberalism in Spain, which embodies a transformative process.

– The legislative foundations as a basis for transforming public education.

– The conception of a new university, through the Provisional Regulations for the organization of the Central University.

– The definitive transfer to the capital of the University located in Alcalá.

– The relevant people who were key to the change in education in Spain.

Likewise, the virtual exhibition shows the transforming process that education underwent with liberalism and how it affected higher education. This is clearly expressed in the “Provisional Regulation for the organization of the Central University of 1822”, a regulatory text that marks a turning point in the conception of a University in Madrid, by outlining a complete project to provide the capital with higher education, which will be considered as a model for other educational establishments.

CALENDAR OF THE TRAVELING ON-SITE EXHIBITION

Faculty of Documentation: May 27 to June 21.

Botanical Garden: From July 8 to September 1.

Faculty of Philosophy/Philology: From September 23 to October 20.

Faculty of Economics and Business Administration: November 11 to 24.

Faculty of Chemistry: From November 25 to December 20.