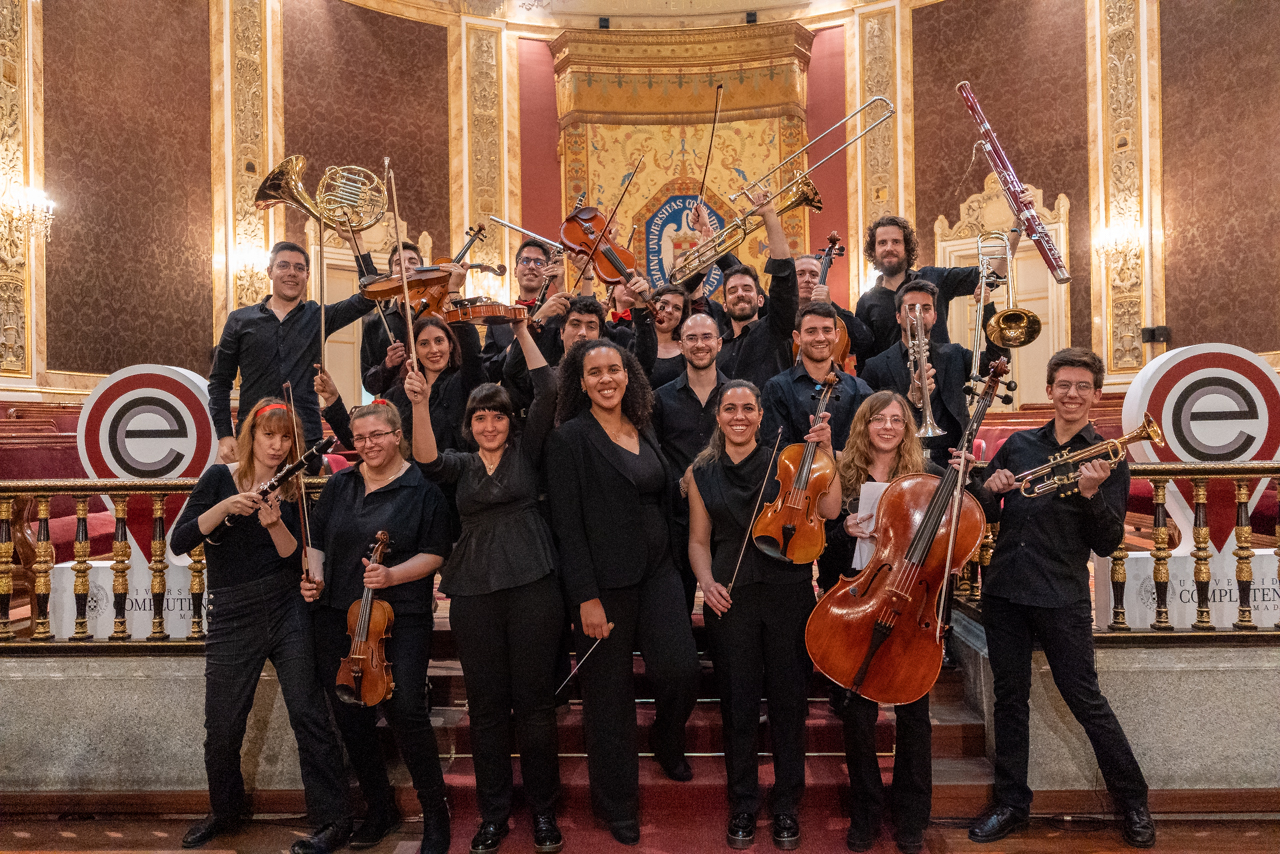 The Historical Auditorium of the Complutense University became for a few hours on April 28 an auditorium where the notes of some of the most popular movie soundtracks of the last decades -Star Wars, Game of Thrones, Pirates of the Caribbean, The Avengers…- and also of other more unknown but of enormous musical quality, resounded. It was the Joven Orquesta de Estudiantes y Colegios Mayores (JOECOM) that made this concert possible, organized by Encuentros Complutense, and as its director, Teresa Bulungu Lufuluabo, says, it has shown that classical music and youth can go hand in hand and “be as much fun as rock & roll”.

The Joven Orquesta de Estudiantes y Colegios Mayores was created back in 2015 with the intention of giving an opportunity to boys and girls who with musical studies or knowledge finally opt to study a university degree and leave their passion for music in the background. Its main promoter was Alejandro Cantalapiedra, currently director of the Orchestra of the Polytechnic University of Madrid, who had the support of the Madrid colleges, who saw it as a wonderful opportunity for schoolboys and girls who were in that vicissitude. In 2019 Celia Llácer took over the direction, until just a month and a half ago she left to take on new projects, and a selection process was opened after which the members of the Orchestra themselves opted for Teresa Bulungu Lufuluabo, a young orchestra conducting student, who is currently in her third year at the Katarina Gurska Higher Center of Music. As she herself points out, “I think it is fantastic that an orchestra of young musicians is conducted by a young conductor”.

Lufu, as those who know her call her, was not frightened to learn that in barely a month -and with Easter in between- she had to make her debut at the head of the JOECOM in a concert that the former conductor had already agreed with the director of Encuentros Complutense, Javier Sierra. The idea of Sierra and Llácer was to demonstrate that classical music can be fun for young people and that in fact it is present in their lives even without realizing it. Between Javier Sierra and the new director they decided that the program of the “concert-meeting” would be dedicated to cinema.

In just three weeks of intense work, JOECOM performed at the Paraninfo de San Bernardo with an enjoyable program that combined soundtracks of well-known films and other more unknown, but of great musical quality. Star Wars, by the great John Williams, opened the concert, followed by Game of Thrones, which although it is not a movie, is already part of those soundtracks that are part of the collective imagination of several generations. Requien for a drink, a film from the beginning of the last decade, was the first bet on lesser-known notes of the evening, followed by the Japanese animated film The Walking Castle. The music of Disney’s Rapuncel film Tangled meant a return to more familiar titles, followed by the unrivaled – at least musically – first installment of Pirates of the Caribbean. Dragonheart, a mid-90s film with a very interesting soundtrack, was the prelude to the final bang offered in honor of the superheroes of The Avengers. The music was accompanied by the projection of images from the films.

Lufu’s idea is that JOECOM will continue this line of work and, in addition to film soundtracks, will incorporate other scores that are often present in everyday life and that, as its director says, many young people do not even know that what they are listening to is classical music. Also, concludes Lufu, “we want other young people to realize that musicians were not born with a stick up their ass, but that we are normal people like any of them”. The Encuentros Complutense concert was undoubtedly a good example of this.