The philosopher of literature, Hans Ulrich Gumbrecht, new honorary doctorate from the UCM 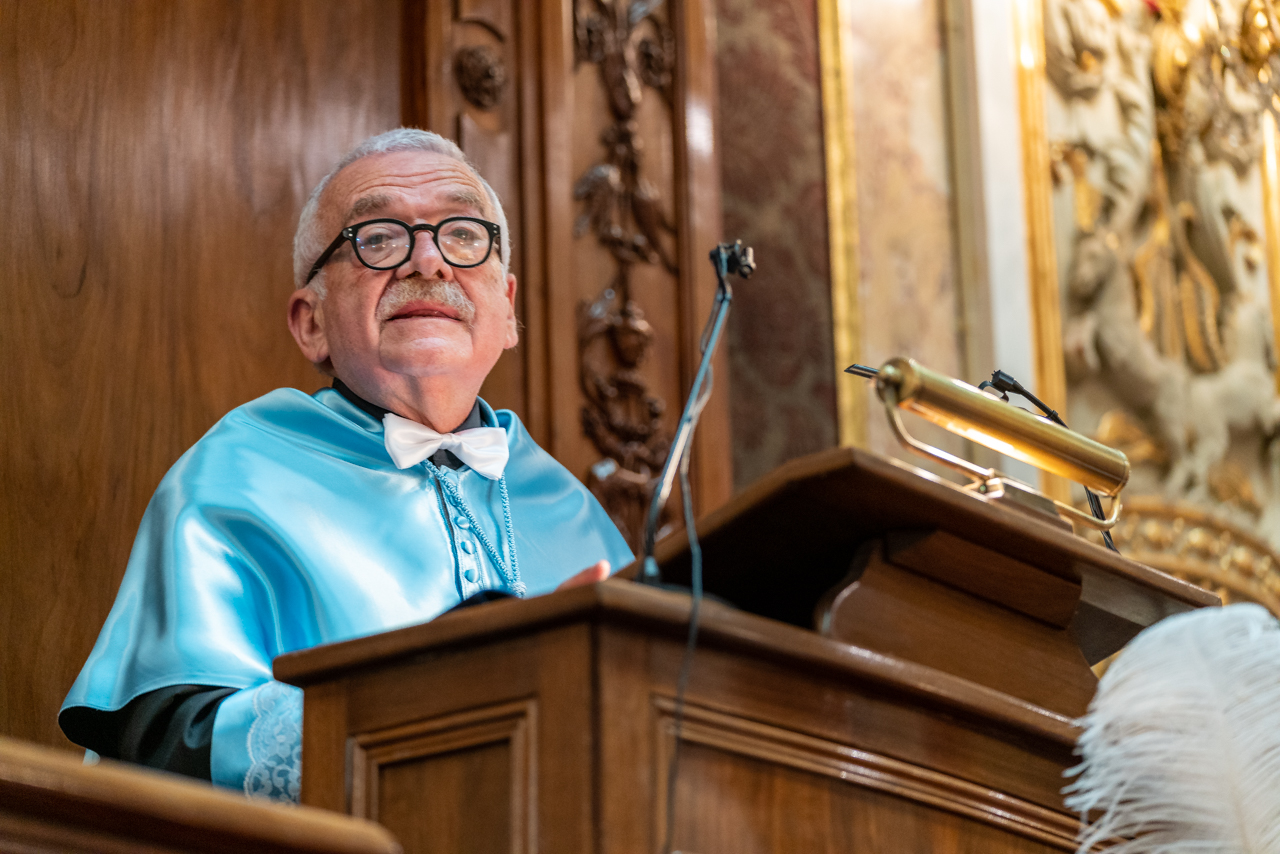 The philosopher of literature, Hans Ulrich Gumbrecht, new honorary doctorate from the Complutense University of Madrid

The San Bernardo Auditorium hosted the investiture of Hans Ulrich Gumbrecht as Doctor Honoris Causa at the proposal of the Faculty of Philosophy. The sponsor of the ceremony, José Luis Villacañas Berlanga, from the Department of Philosophy and Society, highlighted the close relationship that the philosopher of literature has with the culture of our country since he came to study in Salamanca in 1969, when he was just over twenty years old. The rector Joaquín Goyache also praised the work of the new honoris causa and assured that one of the noblest missions of the university is to recognize merit and pay tribute to all those who spread knowledge, especially if they blur the boundaries between disciplines as Ulrich Gumbrecht himself does.

The new member of the faculty assures that he fell in love with Spanish culture and literature as soon as he arrived in Spain, where he met his wife and had two children. Hans Ulrich Gumbrecht admits that years later, when he separated, he felt that “suddenly he was no longer part of Spanish culture,” something he has now recovered, thanks to the Complutense University, which has allowed him to become one more in our culture. “It is a late redemption, but a very important one in my life,” he said emotionally.

In his speech, Professor Ulrich Gumbrecht wanted to pay tribute to three Spanish intellectuals, Ramón Menéndez Pidal, Fernando Lázaro Carreter (whom he considered the best professor he had ever had) and César Real Ramos. The latter, more unknown than the previous ones, was an expert professor in the poetry of the 17th century, professor of medieval Castilian literature and his father-in-law, as well as an “inspiring, agile, entertaining and enthusiastic spirit” that filled him with love for Castilian literature.

According to the new honoris causa, Real Ramos was also a professor of Luis Martín Santos, of whom he highlighted his “masterpiece”, Tiempo de Silencio, which he compared to James Joyce’s Ulysses and Marcel Proust’s In Search of Lost Time.

The godfather of the investiture, José Luis Villacañas Berlanga, likes to imagine Ulrich Gumbrecht in a Platonic Eliseo, chatting with Ortega y Gasset, reflecting on life, sports, reason and historical time, daily life and the most magical beliefs that order our ideas, as well as on the media.

The Complutense professor assures that both Ulrich Gumbrecht and Ortega y Gasset are two worldly philosophers, attached to reality, and hence the new honoris causa has published books such as Elogio de la belleza atlética, En 1926. Living on the Edge of Time or After 1945: Latency as the Origin of the Present.

He also has a very important work dedicated to the History of Spanish literature, in two volumes, published in 1990, but which has never been published in Spanish. Ulrich Gumbrecht explained that Spanish literature and culture attracted him because of its “ontological oscillations”, its existentialist texts, for not offering solutions and for never having abandoned metaphysical abstraction.

The lecturer himself considered that he himself has a tragic sense of life, although not in a strictly Unamunian sense, but typical of the whole generation that was born in Germany after the Second World War and that “they can only have a relationship of redemption with the past”.