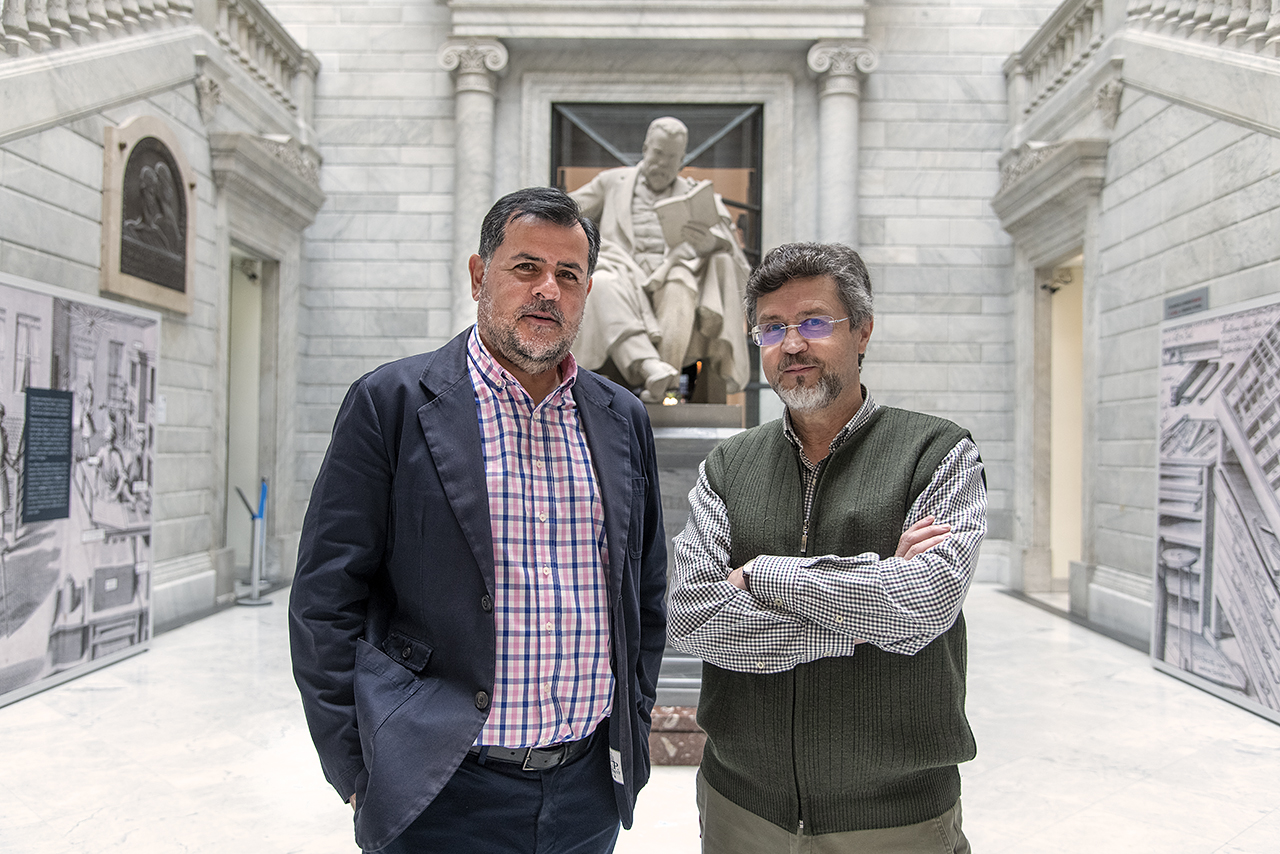 Incunabula. 550 years of printing in Spain and Kâulak

Incunabula. 550 years of printing in Spain and Kâulak: photographer, writer and painter are the names of the two exhibitions on display at the Biblioteca Nacional, the first until 23 July and the second until 28 August. Both have a curator from the Faculty of Documentation Sciences at the Complutense University, and the photographer’s exhibition is curated by Juan Miguel Sánchez Vigil, from the Department of Library and Information Science, while the exhibition on the five and a half centuries of printing has Fermín de los Reyes Gómez, from the Department of Hispanic Literature and Bibliography, as curator, a responsibility he shares with María José Rucio Zamorano, head of the National Library’s Manuscripts and Incunabula Service.

Fermín de los Reyes explains that Incunabula commemorates the 550th anniversary of the arrival of the printing press in our country, a moment represented by the original Sinodal de Aguilafuente, printed in Segovia in 1472. The visit begins with a replica of a 17th century printing press and then leads to a room where you can see some of the Spanish incunabula, including the first book printed in Spain. María José Rucio reports that the room in which this exhibition is on display has been used for a few years to display large books from the Biblioteca Nacional’s own collection, but on an occasion such as this it made no sense to hold the exhibition without the first book printed in Spain, hence the request for the Sinodal de Aguilafuente from Segovia Cathedral, where it is kept. The rest of the books on display are all from the Biblioteca Nacional.

The sections of the exhibition discuss the transition from manuscript to print, the different types used (Gothic, round type, Hebrew and musical characters), the introduction of the printing press in Spain and its expansion throughout the Peninsula, the use of engravings, and the different themes that appeared in those early years.

In the exhibition, according to De Los Reyes, the aim has been to show the most striking of all the items held in the Biblioteca Nacional, “whatever might be most appealing, in an exhibition with little text, but very didactic”. Visitors can also take away the exhibition leaflet in sheet format to fold and cut it out at home, just as they would do in a printing press.

Among the many materials on display is a bull of indulgences, which is “a unique copy in the world, printed in Seville on parchment, for the Christianization of Guinea and the Canary Islands”; a book of love and chess, which is the first chess text that has been preserved, with the new rules “from the inclusion of the figure of the queen who acquires a great capacity, in the likeness of Isabella the Catholic”; the first Spanish book with engravings, the Fasciculus temporum, from 1480, also from Seville; The Twelve Labors of Hercules, by Enrique de Villena, printed in Zamora, in 1483, with representative copperplate engravings that accompany the literary texts, “and which is also an emblematic work”; Nebrija’s Grammar, which is the first Castilian grammar, and a biography of illustrious women, which is the first work by Bocaccio to be published in Spain, specifically in the printing house of Pablo Hurus in Zaragoza, which is one of the most powerful in the country, since more or less 10% of the Hispanic production came from there.

The exhibition on Kâulak, which can be visited in the Hypostyle Hall of the National Library, is based on the idea of reproducing the photographer’s studio, which opened in 1904 on Calle Alcalá and closed in 1989. Juan Miguel Sánchez Vigil explains that it was the last modernist studio in Madrid and the exhibition has been mounted to pay tribute to the prolific work of Antonio Cánovas del Castillo, the real name of the man who signed his work with the pseudonym Kâulak.

The exhibition is structured around the original camera, which is kept at the Museo del Traje, surrounding seven sections, from its beginnings to the work of his grandson and heir. According to Sánchez Vigil, in his first stage Antonio Cánovas del Castillo devoted himself to politics, like his uncle, of the same name and architect of the Restoration. After leaving politics, he dedicated himself to amateur photography until 1904, and at the same time he wrote novels, painted landscapes and composed musical works, of which eleven musical scores have been found to date, including polkas, waltzes and rigodons. In the exhibition you can listen to one of these scores, played on the piano by the daughter of the Complutense professor.

After his time as an amateur photographer, focused on pictorialist compositions, i.e. imitating painting, the exhibition looks at his work as a portraitist in three different stages within his studio: the start-up, the hatching and the royal family, “because he made exceptional portraits of the whole family”. The collection held by the National Library is around 60,000 negatives that also include the second stage of the studio up to 1989, although Kâulak died in 1933.

The design of the exhibition “is extraordinary, right from the entrance, because a reproduction of the door of the studio has been made with marquetry, which introduces us to that initial world in which he published dozens of books and some two hundred articles on Art History published in different newspapers”. The entire exhibition takes us through the corridors where his “illustrious men” are shown, portraits that included only two women, María Guerrero and Concha Espina. These photos, according to the curator, are of special interest because they are not retouched at all, while he retouched the ones he sold, and that great selection of characters of Spanish cultural life could be seen as they were on the walls of his studio.

The exhibition also includes some of the postcards that Kâulak made during his life, in which he dealt with a thousand different themes and with great sales success, such as one that represents the scene Quién supiera escribir, from the poem by Ramón de Campoamor, and of which two million copies were sold. According to Sánchez Vigil, the important thing about this character is that he was “the great disseminator of image culture, he was one of the greats of marketing, with his postcards; with technical photography books; with the creation of the magazine La fotografía, which he kept up month after month for thirteen years; with those scores, composed by himself, that he gave to his clients when they bought photos from him; with brooches, pendants and even cufflinks; with portraits published in all kinds of magazines”.