The complutenses Julio Arce and Ruth Piquer review the emotional history of the Spaniards through vinyls. 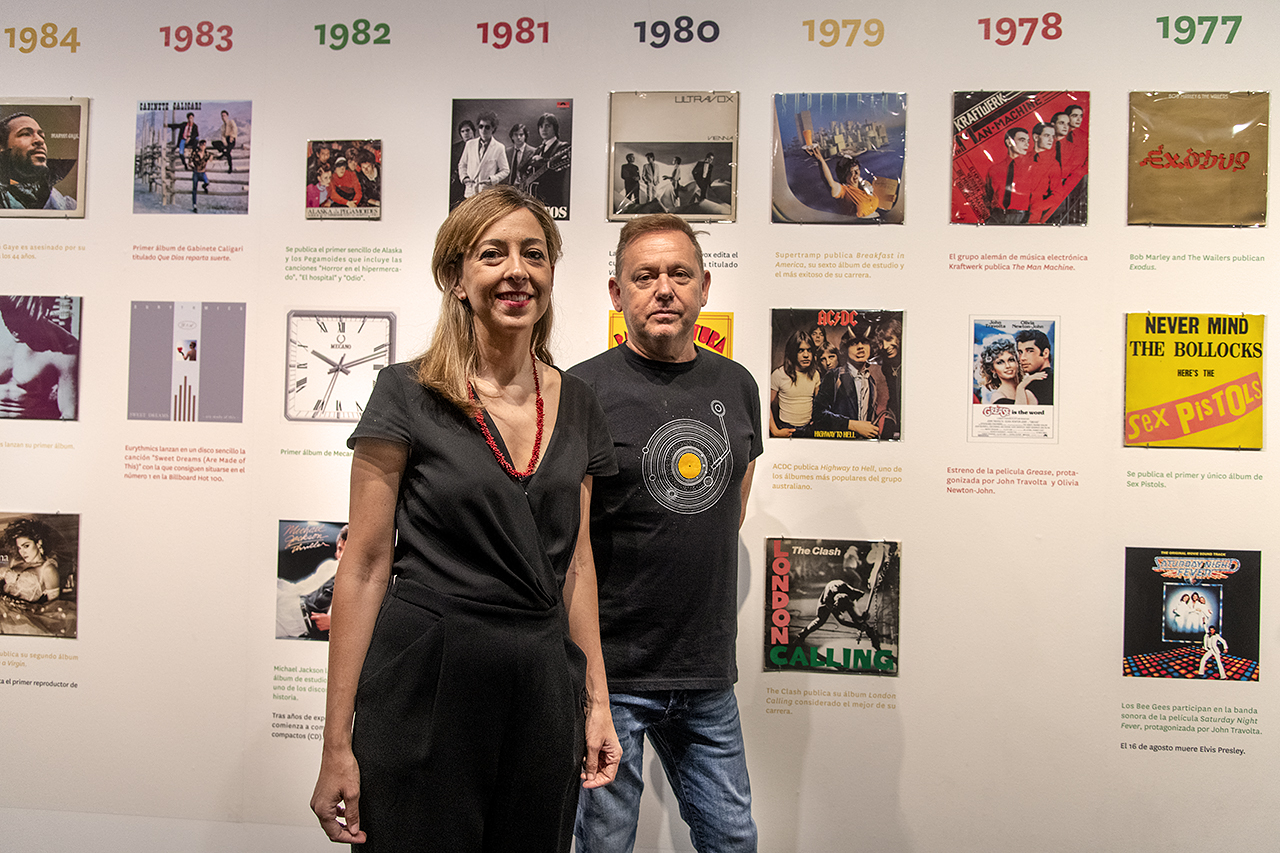 “The vinyls of Plásticos y Decibelios. La colección de Julián Ruiz” is the title of the exhibition that can be seen at the Centro de Cultura Contemporánea Conde Duque until September 18.

The curators of the exhibition, Julio Arce and Ruth Piquer, professors of the Department of Musicology of the Faculty of Geography and History, explain that the more than 800 vinyl records on display are a real walk through the memories of childhood and youth of any visitor, since “music has the ability to recall and remember the past, and sometimes imagine the future”. It is, in short, and as Andrea Levy, delegate of the government area of Culture, Tourism and Sport of the Madrid City Council, highlighted at the opening, a review of our cultural history and “if we are inspired by art and culture, we will not be inspired by tolerance and hatred”.

Julián Ruiz is a music producer, creator of the radio program Plásticos y Decibelios, and an avid vinyl collector, which has led him to compile, so far, 623,202 records in his collection. Emilio del Río, director of Libraries, Archives and Museums of the Madrid City Council, encouraged by the musician Raúl Rodríguez, thought it would be nice to show part of that collection, so he contacted the Complutense professor Julio Arce to propose him the idea.

Arce was delighted to take up the baton and as a first step, and with the help of students from the Department of Musicology, they went to Julián Ruiz’s house to catalog the records and make a selection. That work took them a total of six months and has resulted in this exhibition, which is “a personal experience, because it tries to recognize Julián Ruiz by choosing records from his collection, and that implies reflecting both his career and his taste”.

Ruth Piquer adds that the exhibition activates the memory, “not only the personal, but also the cultural and artistic”, since the covers of these vinyls are an iconographic reflection of different aesthetic movements. The exhibition has been divided into different sections, being the portraits section the one that welcomes the visitor, portraits “where the artists’ gaze is of great importance”, and that, as Andrea Levy jokes, allows to have “face to face John Lennon and Sara Montiel”.

The central section of the exhibition includes covers inspired by art or made by artists, and you can also see pictorial records where the vinyl itself is the one that is painted. Behind suggestive red curtains are records showing the involvement of the body and sexuality with pop music, and next to it is a selection of records showing the now iconic rivalry between the Rolling Stones and the Beatles.

Next in the exhibition is an area that the curators have dubbed “imaginary worlds”, where the covers include dreamlike, futuristic, hyperbolic worlds, with impossible figures, monsters and mythological beings. At the end of the exhibition, the records have been placed around the history of Spanish pop rock and cinema, with the inclusion of a twenty-minute video that reviews the importance of film music.

Visiting the exhibition, Julián Ruiz stops and says: “This is the most important Spanish record in history”. He is referring specifically to A song of joy, the version of the famous Miguel Ríos song sung by himself in English and released in the United States. Perhaps he means it seriously or he does it to honor his “validator”, Miguel Ríos himself, who also attended the inauguration. For the singer, this exhibition is “one more plea against the throwaway policy, it is an everlasting walk through our feelings and our culture”. According to Ríos, the music of the 50s and 60s managed to empower young people, turning them into a social class that had been silenced until then”.

Julián Ruiz recalls that his father bought a pick-up, a small portable record player, and that in 1961 he bought his first record, one by Chubby Checker, and that, coincidentally, two months later Miguel Ríos released his first album, with a version of a twist that appeared on that Chubby Checker record.

Finally, Ruiz believes that music listened to on vinyl is priceless and that leads him to shout: “Long live vinyl!